Share All sharing options for: Talavera Brings Casual Mexican to The Gables

Here now, it's Good News/Bad News, a roundup of what the early goers to a brand-new restaurant have to say about the place. Chime in. 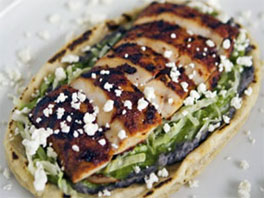 Talavera Restaurant is open for business in Coral Gables, and the early reviews are few and far between and as mixed as a sampler plate. That said, Talavera should do very well assimilating into the Coral Gables culinary landscape. As long as they fix their chips and keep their cocktails potent.

The Good News: A Martini Boys early review of Talavera says, "Talavera isn't overstepping its reach. It's just a nice, friendly, semi casual Mexican spot," with nothing on the menu over $18. And although the review calls the cuisine "somewhat low-market (but still fresh)," the decor is said to be well executed with modern Mexican art. [Martini Boys]

The Meh News: Food For Thought was there last Friday and said the salsas were good but the chips were "interesting." "The round, coaster-sized, grey-tinted chips were baked rather than fried, and tasted stale." As for the grilled chicken huarache, well "I liked the idea and the combination of flavors, but the chicken was a but underseasoned." Tacos off the lunch menu were good, but left the blogger hungry for more. Service was seamless and, "with the stress of opening day now past, I expect that Talavera is going to become a regular rotation place for the Coral Gables crowd." [Food For Thought]

The Tequila!: And what we think may be the most astute observation was this one: "If you're a little less wild (sometimes it's best to exercise caution; their liquor is boozier than it seems), opt instead for the house ice tea made with hibiscus and hamache flowers." [Martini Boys]