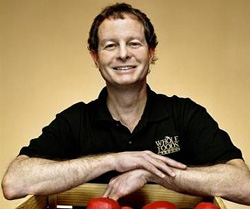 Whole Foods' resident corporate nutbar, CEO John Mackey, just had a lengthy profile in this week's New Yorker, which was just the latest instance of his, ahem, eccentric ways of dealing with the media. But now comes the news that he's relinquishing his title of chairman. Mackey will still be the company's CEO, but the surprising move—he's held the chairman title since 1978—means that he'll be less ubiquitous as the public face of Whole Foods. This is a long time coming. >>