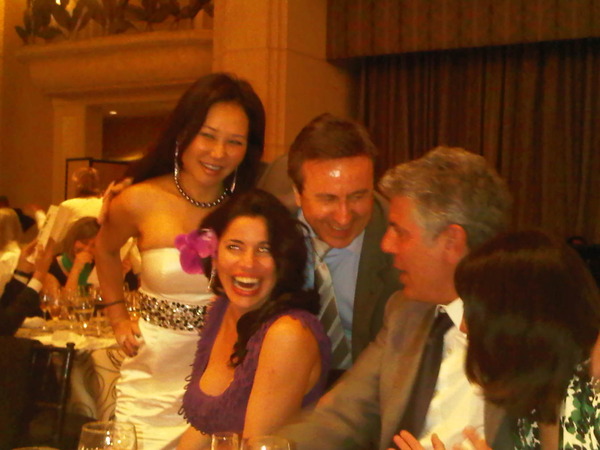 Daniel Boulud's come a long way from Lyon to the Loews, where fans and colleagues paid homage to the chef with a tribute dinner full of pomp, circumstance, Cristal,multiple courses, Gail Simmons displaying considerable auctioneer skills, and a detente between Anthony Bourdain and his favorite "kulinary gangsta" Guy Fieri. Huh? Eater had the privilege of sitting across from the two, separated only by Bourdain's better half, Ottavia, (who was just as amused by the situation as the rest of us) and Lee Schrager. Turns out, Fieri is a judge at Sunday's Death Match On The Beach: Battle Fish, pitting Bourdain against his real-life bff Eric Ripert, whose wife Sandra sat next to Bourdain while her hubby was busy in the kitchen. "He takes this thing really seriously, Bourdain told us, explaining how he's the yang to Ripert's yin, the Burn to his Turn, or something like that. Bourdain, a fan of Jersey Shore, told us he's off Tuesday to a different kind of shore, this time Liberia, where for the first time in No Reservations history he'll be traveling with security. He's also going back to Lebanon, oh, and porn legend Ron Jeremy will play a special role in an upcoming episode dedicated to food porn.

From The Hedgehog to Fieri, although the duo didn't exactly fist pump or high five each other throughout the night, they did make polite enough conversation, at one point actually having a tete a tete where the only jabs as far as we could tell came everytime Fieri thrusted his head into Bourdain's chest. Fieri, a fan magnet who was interrupted more times than a guest on Larry King Live, and whose wife Lori showed excellent restraint and finesse when an overzealous, overly processed Aventura fan nearly pistol whipped her with her hair extensions, told us that while he would love to have a house in Miami, he isn't moving here anytime soon, and that he's very psyched for his gameshow gig, which he told us was "wild." Wilder than that was the entire scenario in general. While we won't hold our breaths for a Bourdain/Fieri buddy flick, perhaps Boulud should also be honored for his ability to bring the unlikeliest of folks together and attempt to mend fences between Philippe and Michael Chow . So should Schrager. And if Bourdain and Fieri could make like best buds, maybe there's hope for the world yet. Or at the very least, an Academy Award in their futures. [EaterWire]