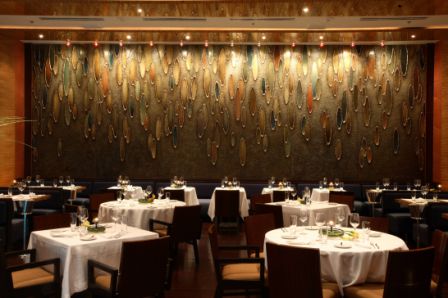 The restaurant once too posh for its own good and for its neighborhood, the one a little too ambitious, exorbitantly expensive, and perhaps ahead of its time in which chef Alberto Cabrera and an unknown, uber young sous chef Eli Kirshtein served dishes like pork belly with banana, white bean puree and pickled date and Halibut Sous Vide on Bernardaud and Montgatina way before Padma Lakshmi could even pronounce them has been seized. No, not by the Feds as many suspected, but after several failed attempts and incarnations as club, restaurant and place for homeless people to shower, Karu & Y has been returned to its original owner, Ice Palace Film Studios, which will use the space as a special events facility servicing large events. It also has a new name: the West Building, which will make its debut on March 25 with Made Event, a slew of cutting edge Winter Music Conference events. [EaterWire]