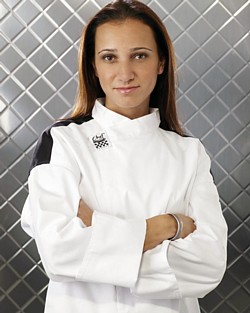 So that steakhouse opening at the Eden Roc Renaissance Miami Beach in the fall with Hell's Kitchen runner up and 3030 Ocean alum Paula DaSilva? It's not just any kind of steakhouse. According to a press release, the restaurant has tapped restaurant (Boston's Mistral, among others), hotel and nightlife developer Seth Greenberg, whose most recent project was co-developing Boston's Ames Hotel, to work with DaSilva on creating a "new, farm-friendly steakhouse fated to be the next destination restaurant in Miami Beach." Greenberg's vision entails all sorts of things, namely earth, fire, water, air and space, all which will somehow be added to the menu. Greenberg and DaSilva have just begun to work on this culinary big bang, but according to Goldberg, "“This is a tremendous project with enormous opportunity to bring a fresh new version of farm-to-table dining to Miami Beach. Incorporating local produce, meats and ingredients with our classic natural elements will result in an infinite array of dishes designed to dazzle diners.” [EaterWire]