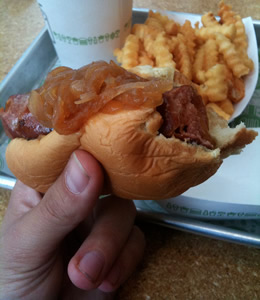 Everyone's going mad in Miami for new Heat messiah LeBron James. And Shake Shack's no exception, wasting no time to introduce The Le-BRAT James, a grilled bratwurst "bringing the Heat with Tabasco simmered onions." The hot dog was originally released in New York City back in May as a "special one-day menu item" in an attempt to convince James to join the Knicks, but now we get both the player and the dog. Incidentally, the Le-BRAT dawg costs just $5.75, which, if it were millions, would be what James will be making approximately every minute or so in his new gig. [EaterWire]