The Birth of A Food Truck: "Signing My Life Away"

Share All sharing options for: The Birth of A Food Truck: "Signing My Life Away" 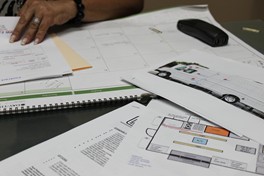 Richard Hales of Sakaya Kitchen has given us unprecedented access into the process of gassing up a food truck from scratch. Each week or so Eater Miami will track the progress of Hales' newest baby on wheels, Dim Ssäm à Gogo, through his own words and images. And away we gogo.

Part I: Signing My Life Away

Opening Sakaya Kitchen has turned out to be an exercise in self indulgence. I cook what I like to eat, I allow changes to the menu only when I feel like it and I kick dumbass customers out for being dumbasses. Pretty much how I live my life now after kissing five-star hotel ass for the last eight years. I am ready to expand so the idea of a mobile food truck is appealing on many levels.

The first notable difference is in the startup—not having to deal with the three L’s of real estate—not the L’s you’re thinking of but rather: Listing agents, Landlords and Lawyers. Eliminating those jokers is pure joy and saves you a “food-truckload” of money, aggravation, time, headaches?and so on.

Now “Location, Location, Location” is important , but takes on a whole other meaning. Finding that golden piece of curb looks to be a whole lot easier but seems to be fraught with danger lately—like other food trucks waiting with brass knuckles to knock your ass back to the garage.

Second, the start-up cost of a food truck is very low compared to traditional brick and mortar restaurants. The simplest new restaurant build out will cost at least $150 a square foot or about $150,000 for a 1,000 square foot spot. Conversely, $150,000 would get you a brand new top of the line food truck with money to spare or two or three used food trucks with all new equipment.

The barriers of entry are all but eliminated, which can be good and bad. Good, because some real talent can get an operation going and thrive much earlier than before. Bad, because anyone with a little capital and a weak idea will be rolling to a curb near you. The mobile food truck at its best is the modern “hole in the wall” restaurant seeking you now, the savvy diner, on the streets.

So what has happened so far on my build is a few delays right from the get-go. The truck still has not arrived to start the build and is about a week late. We have done a rough draft of the kitchen layout, ordered the equipment and started working on the exterior design. Starting the process with the city for the mobile license, testing new recipes and beefing up the staff. Adam Forman of High Voltage Tattoo/LA Ink is on board and has been sketching for the past week (yikes, hopefully not too $$). The plan is to have the truck ready on September 12, which gives me no time to test the kitchen before the launch.

To Be Continued... [EaterWire]