The Birth of a Food Truck: Blowing Budgets

Share All sharing options for: The Birth of a Food Truck: Blowing Budgets

Richard Hales of Sakaya Kitchen has given us unprecedented access into the process of gassing up a food truck from scratch. Each week or so Eater Miami will track the progress of Hales' newest baby on wheels, Dim Ssäm à Gogo, through his own words and images. And away we gogo.

Opening Sakaya Kitchen’s mobile food truck Dim Ssäm à gogo may be much easier than opening the restaurant itself, but some of the same problems still remain. “Construction contingency allowance” is a fancy way of saying you will spend more than you thought. Typically you should add 20% to the construction cost for unexpected costs, change orders to the original plan, etc., on any build. Well maybe instead of giving the finger to business school, I should have stayed a bit longer before packing my bags for culinary school –I am currently about 30% over budget on the build.

It has been like buying a car--so many options to make one sweet ride. Did I really need the super duper sound system with DVD, remote control and all the bells and whistles to rock out on the curb? Maybe not, but I did need a safe box, exterior awning, exterior lighting, custom wrapping and security cameras to name a few. All of which I should have, but did not budget for. Once the actual truck was received, we realized the kitchen layout we originally designed would only allow for about 18 inches of space down the center in some spots. I am a big guy and the last decade has proved I’m not getting any smaller, so back to the drawing board we went. 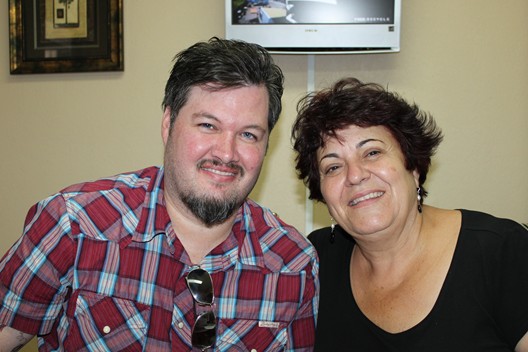 [Hales and Tania from FoodCartUSA]
The redesign was no problem but during the process I somehow upgraded all the equipment. Why install a two-door fridge when now you have room for four? Why install a 24-inch grill when a 36-inch fits? Maybe it is because Food Cart USA is completely run by women, but every time I said “yes” I was adding thousands of dollars. Ask my wife and daughter. It is, indeed, a real weakness.

I inspected the truck and it was like inspecting an alien spaceship. What the hell do I know about a 2003 model 18 foot Workhorse step van? I looked, I drove, I kicked the tires, but other than that who knows what I have in store!? The truck looked like crap to be honest, but within a day of the build it was already transformed in the right direction. The truck has been completely stripped, insulated, chopped, cut, doors removed and interior frames for the equipment installed. Submitted the kitchen layout and vin# to the city for review (by the way, there are currently 30 plans in for review for mobile food trucks with the city).

Soon we will see a food truck on every corner –either “open for business” selling food or “out of business” selling the truck. If 90% of all restaurants fail within the first year how many food trucks will do the same? Picked up the commercial auto insurance and catering general liability insurance, cost is not too bad.

Started to look for potential spots around the city and taking suggestions/requests on Twitter (@sakayakitchen) and Facebook. Attempting to make our September 12th deadline for the Fall for the Arts Festival, Food Cart USA is working late into the night and on weekends. I may even have to take off my apron at Sakaya Kitchen and take a crash course in welding or something.
To Be Continued...[EaterWire]