Share All sharing options for: D'Angelo Trattoria Debuts in Delray 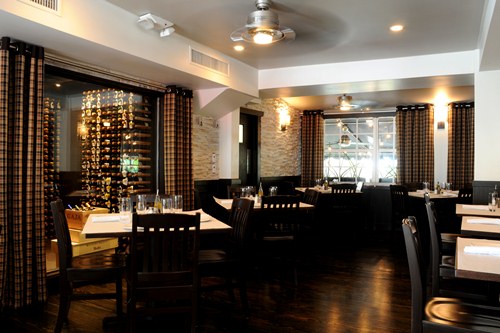 [Photo: Alissa Dragun]
Telephone: 561-330-1237
Status: While Casa d’Angelo will always remain in his heart, Chef Angelo Elia has taken his culinary expertise to a different venue and under a different name. The man behind Casa d'Angelo restaurants in Fort Lauderdale, Boca Raton and at the Atlantis Hotel in Paradise Island, has opened D’Angelo Trattoria in the former home of Carolina’s Coal Fired Pizza. Set in a 1920s cottage, the new restaurant features traditional Roman cuisine including an array of appetizers, salads, carpacci, pastas, prime meats, seafood and pizzas from a wood-burning oven. Executive Chef Rickie Piper, who has been with Elia for more than ten years, has taken the helm at this new location.
Antipasti dishes range from $9 to $16; salads range from $10 to $12 and pasta dishes range from $14 to $19. There’s also thin-crusted pizza on the menu with prices ranging from $13 to $18. The deserts, which change daily thanks to an in-house pastry chef, include baba, a rich sponge cake soaked in liquor syrup; and delizia al limone, a light Limoncello-filled cake with cream topping. A pastry shop and gelateria also is set to open there soon.---Lily Rano [EaterWire]