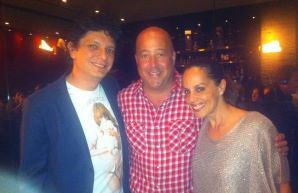 Short Order did an excellent job stalk--er, following Bizarre Foods' Andrew Zimmern as he ate--and Tweeted--his way through Miami filming footage for upcoming episodes. While I did indeed have the pleasure of dining with him Friday night at Red, The Steakhouse, where we waxed philosophical on the scenier side of Miami's dining scene along with photog Manny Hernandez and broke into their mongo Alaskan King Crab and some Flintstonian-sized steaks, I also had the displeasure of keeping my mouth shut for a change in terms of his plans to join Lee Schrager at last night's Cobaya dinner at Azul. Was a hard task, though not as hard as Zimmern's task of eating swamp turkey in the Everglades Friday. What I did learn was that Zimmern doesn't eat that much, which explains his svelte figure. I also learned what everyone probably could figure out by just watching his show---that he's a cool dude who loves his job for more reasons than being stopped by star*uckers and tourists from his home state of Minnesota. Stay tuned for air dates and more information. [EaterWire]