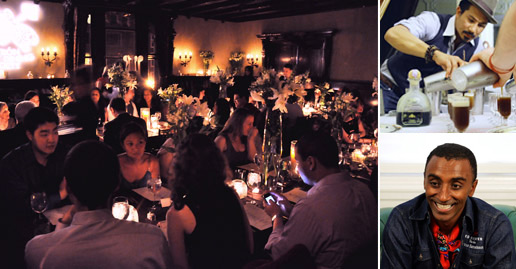 Scenes from last week's Patrón Secret Dining Society event in New York City.
Just last week, Patrón Secret Dining Society unveiled its most successful event yet, with an unforgettable menu created by James Beard-award-winning chef Marcus Samuelsson and mixologist Tomas Delos Reyes from Top of The Standard. Held at the Fletcher-Sinclair Mansion in New York City, Patrón Secret Dining Society set the standards high for the upcoming dinners, but they are promising to deliver again in June.
We're still one week away from the announcement of the event's details, but we can tell you that the next location will be in another city with its own Eater. Don’t miss out on this experience, so sign up now to become a member of Patrón Social Club. Once the details are announced on June 2nd, you’ll have three days to answer a riddle for a chance to win a seat at the table. Remember, only Patrón Social Club members will be eligible to win.