Share All sharing options for: Rainer Becker on Zuma's First Year in Miami

Welcome to One Year In, a feature in which Eater sits down for a chat with the chefs and owners of restaurants celebrating their one year anniversary. 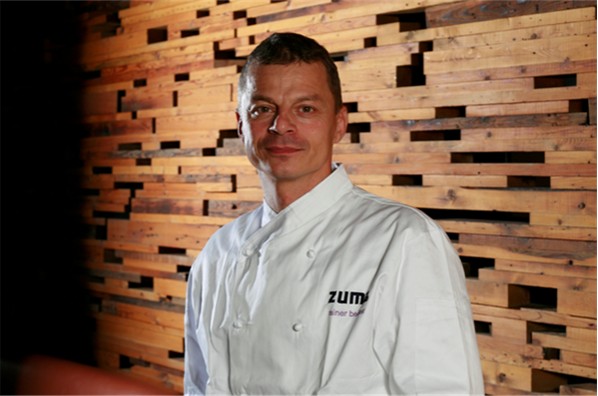 Rainer Becker spent six years working in Tokyo perfecting the art of izakaya-style Japanese cuisine. After the original Zuma opened in London in 2002 to smashing reviews, Becker expanded his Zuma empire to Hong Kong in 2007, Istanbul in 2008, Dubai in 2009 and, to the shock and awe of many a jet setting culinarian, Miami--downtown Miami no less--in 2010. We spoke to Becker about his decision to open his first US outpost right here, asked how his year here has been, among other things.

Why did you decide to open in Miami and what made you choose downtown Miami as opposed to, say, South Beach?
The reason for the city was the energy. Miami has a really vibrant social scene. Its a fun city where people enjoy themselves, which is what Zuma is all about. I really wanted a waterside location and the site itself was perfect, with the view of the Intracoastal and the [Brickell] bridge and even the terrace is on the water. Downtown just seemed to be easier for people to access, as the beach road can get packed with traffic in my experience--also, we get really good business trade during the week downtown.

How was your experience opening a restaurant in Miami as compared to, say, Dubai?
Well I wouldn’t say it was easy (with obtaining permits, etc), but really it's the same administration and logistics wherever you open. With that said, Miami was no different to London or Hong Kong, or anywhere else. We had a local partner as we always do in each location to assist with the particular requirements of each place.
How was the opening?
Fantastic. The welcome was phenomenal. I would definitely have to say that the Miami crowd is a particularly discerning bunch, they let us know exactly what they liked and what they didn’t. However, there was a warmth and an involvement – [and] thanks to that, the settling in period was really enjoyable.
Lee Klein of the Miami New Times said your team "operates like LeBron's Miami Heat will--each worker seeming to know instinctively what others are doing and thus what each needs to do to keep the flow constant. It is very NBA Zen." We know what happened to LeBron's Miami Heat, so what say you of the comparison?
I’m not to sure what to make of that! Our team building is pretty strategic. All our senior staff spend time in London and work in the kitchens and on the floor, so they are immersed in all that is Zuma. Then when we open, we send over key people from London to help with training and support. When we recruit, we select more by personality, not just based on qualification. You can always train someone in the facts but the enthusiasm, the eagerness has to be there in the first place. By the time the London guys leave, the team is really settled. There is no great science to it, we have a very low staff turnover because we simply look after people. When a team is established they just get into a rhythm of working together.
Six months into the restaurant's opening what, if anything, changed?
Not so much has changed actually, we opened the terrace after about six months and a few months ago opened for dinner on Sundays. Then we debuted the Sunday brunch.
What are your priorities right now?
Locally we are only a year old and you need to work through the seasons, the peaks of business, the quiet times to get the feeling for a place. At the moment we are extremely happy with all that is Miami and our focus is on continuous improvement as always. Globally we will be opening in Bangkok late 2011.
Would you ever open another restaurant in Miami?
My team always jokes with me that we opened in Miami because I had to have a restaurant near the beach..... So maybe I will open another – that way I will have twice the excuse to visit. [EaterWire]