Share All sharing options for: Ivette Naranjo On Cafeina's 1st Year in Wynwood

Welcome to One Year In, a feature in which Eater sits down for a chat with the chefs and owners of restaurants lucky enough to make it to their one year anniversary. 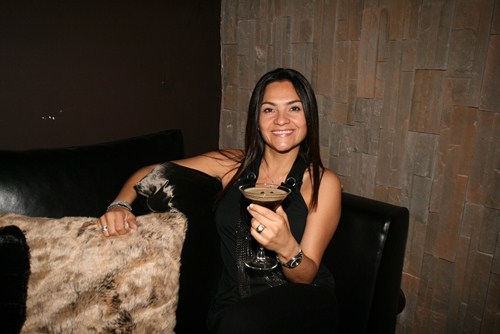 Cafeina’s Ivette Naranjo has a background in the flooring business, which makes it sort of apropos that she would lay the groundwork for nightlife in Miami's emerging hipster enclave of Wynwood. Naranjo realized the void in nightlife in the 'hood and split her flooring warehouse in half to create Cafeina, which also happens to boast the first full liquor license in Wynwood, which has since issued 25 to surrounding business owners. We talked to Naranjo about her first year in biz and the buzz she's thus far created.

Why did you decide to open in Wynwood and what made you choose there as opposed to, say, South Beach?
I have been in the Wynwood area since 2002 and have witnessed its growth year by year, so it was a no brainer. In my opinion, the neighborhood is a lot like New York’s SoHo district, circa late 1960’s. Artists, foodies, creative business types, you name it, they’re gravitating here and it’s great to be a small part of that big movement within this city.

Miami is notorious for being a pain in the ass when it comes to restaurant openings. Any major trials and tribulations in getting those doors opened?
Not at all, I was one of the lucky ones. The city was very cooperative; as a matter of fact, it took exactly 6 months to turn my then flooring warehouse into Cafeina. The city even had a worker out here to fix a power generator the day of our soft opening. If it wasn’t for him, we would have all been holding candles with our Café con Leche martinis!

How was the opening?
It was during Art Basel?and a success in my opinion. We had a great group of family and friends, locals, and even a few from the jet set crowd that were in town for Basel. Most importantly for me, it was a great sense of accomplishment, realizing my vision for the space and watching others' reactions as they were introduced to Cafeina for the first time.

Six months into the restaurant's opening what, if anything, changed?
Oh wow, I think the real question is what hadn’t changed. I’m kidding, but to be honest, Cafeina was my first venture into hospitality and nightlife. I grew up, and made most of my living, in the flooring business. I would say that we have definitely made some changes, both behind-the-scenes and in the forefront, but overall, our mission has always been to be a local’s joint where chic and sophisticated meets unassuming good times.

What has been your biggest success this past year?
I would have to say it’s a tie between the People magazine event we hosted with Ricky Martin and the proclamation presented to us by the Miami Beach Vice Mayor, Michael Gongora. I would also have to say that it’s been an honor to work with the artists that have displayed in our art gallery, known as the Wynwood Exhibition Center?I could go on and on. This year has been a fabulous rollercoaster ride.

Your biggest failure?
As a first time hospitality entrepreneur, opening the first lounge of its kind, in a neighborhood not known for having lounges of any kind, I’d be lying if I said I knew what to expect. Have I made mistakes? Yes, but I learned more from those than any of my successes.

What are your priorities right now?
To build a solid team.

Would you ever open another restaurant in Miami?
Not in Miami, but I would like to open a few more Cafeinas in other cities?let’s see what the future holds. As for right now, I am going to take it one step at a time so that I can enjoy this ride.