Jessica Goldman Srebnick on the Evolution of Wynwood Kitchen & Bar

Share All sharing options for: Jessica Goldman Srebnick on the Evolution of Wynwood Kitchen & Bar

Welcome to One Year In, a feature in which Eater sits down for a chat with the chefs and owners of restaurants lucky enough to make it to their one year anniversary. 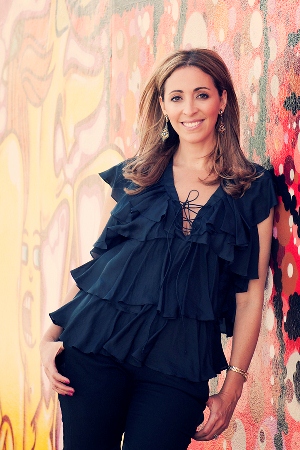 The Principal and Managing Partner of Goldman Properties and the COO for its hospitality division, Jessica Goldman Srebnick has the whole visionary thing in her DNA thanks to her father, Tony, whose prescience has been responsible for, among other things, the original South Beach renaissance back in the day and more recently, the arty one going on in Wynwood. Goldman Srebnick orchestrated the concept and design of Wynwood Kitchen & Bar and also plays a pivotal role in the evolution of Wynwood Walls, one of the most acclaimed street art museums in the nation. We talked to her about WKB's first year in biz and what she foresees for the restaurant's (and neighborhood's) future.

You opened an arty restaurant in an arty neighborhood where some would say style and substance are equally important. Do you agree?
Absolutely. It was something needed in the neighborhood and an extension of Wynwood Walls. It made sense to incorporate outstanding food with outstanding art.
What's the biggest draw for restaurateurs in Wynwood?
To be on the ground level of an emerging neighborhood is so exciting and challenging, but we have never been ones to shy away from a challenge. And as proven in the past in areas like South Beach and Soho, restaurants are an integral part of neighborhood revitalization.

What, if any, similarities are there between WKB and your dad's neighborhood making, groundbreaking Soho Kitchen & Bar?
Goldman Properties has opened restaurants as a part of our model of reinventing neighborhoods for the past 40 years. Soho Kitchen and Bar was groundbreaking in how we introduced and expanded the language of beverage to our customer. In the 1980’s we offered 110 wines by the glass, we coined the term “flights of wine, flights of champagne” which gave our customer the opportunity to taste and explore the world of beverage. What we discovered early on, is that great restaurants drive people to a neighborhood. The most striking of similarities include: the visual excitement of the space, the similarity in customer (adventurous, curious and creative), great value, top quality food product, a bold artistic point of view, innovative, and both are/were an exciting and sexy environment. The last comparison: that in a few years from now you will also refer to Wynwood Kitchen and Bar as groundbreaking to the development of Wynwood as Soho Kitchen was to the development of Soho.
Where are the biggest difficulties about operating a restaurant in Wynwood?
Making people aware. Wynwood is a destination. Once they walk in the restaurant, they’re converted, but getting them to come and experience is challenging.
Miami is notorious for being a pain in the ass when it comes to restaurant openings. Any major trials and tribulations in getting those doors opened?
(Laughs). We opened three days before Art Basel and were not prepared for the onslaught of business that was to come. We definitely suffered those first several days, but as a result, we learned and made changes.
How was the opening?
Thrilling, difficult, challenging. Like anything new, you can plan and plan, but there are some things you just can’t predict. Having a team of fluid and flexible people made it better.
Six months into the restaurant's opening what, if anything, changed?
A lot. We recognized that the original menu concept wasn’t working. We hired talented chef Miguel Aguilar to reconceptualize the menu to something better suited for what people wanted. We created a Latin-influenced small plates menu so that diners can taste a lot of different offerings. We also created a great beverage program with artist inspired cocktails.
What has been your biggest success this past year?
Art Basel. With the changes and additions to our Wynwood complex – additional murals; “Here Comes the Neigborhood” video series; the pop-up shop; the new book and being able to provide all of that and great meals to over 1200 people a day was an enormous success for us.
Your biggest failure?
Our original menu. We didn’t have a concept that was working but were courageous enough to recognize that and make the change. Once we did that, we found our stride.
What are your priorities right now?
Making sure that everyone knows how terrific Wynwood Kitchen & Bar is. Also, trying to understand and utilize social media in the best way. It’s new and it’s complicated so we are figuring out the best method for Wynwood Kitchen & Bar.
Would you ever open another restaurant in Miami?
Absolutely!
What advice would you offer to prospective restaurateurs looking to open in Wynwood?
Be passionate. Be patient, but know that this will be a worldwide cosmopolitan destination in the near future. [EaterWire]
[Photo/Mia Nunez]
For more One Year In posts published today across the Eater Universe, head over to Eater National.