Miami Tower In Full Color; Enrique Norton Is Back!

Share All sharing options for: Miami Tower In Full Color; Enrique Norton Is Back! 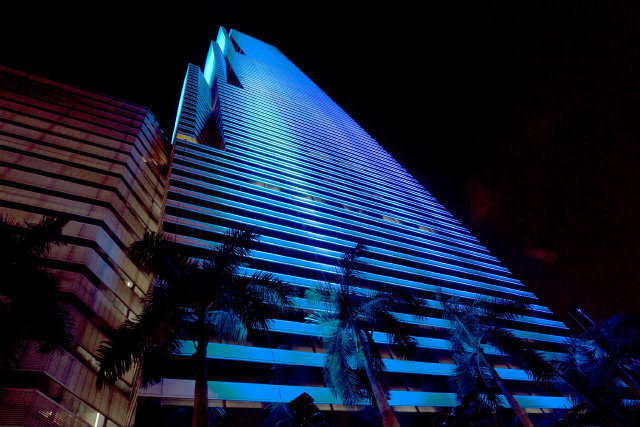 SOUTH BEACH - Despite being approved and funded by voter referendum, the Miami Beach Convention Center's replacement is a big, fat, icky, sore spot for practically everybody involved. Lawsuits have been flying, and accusations of corruption don't seem to be going away. It's been rumored by supposedly very in-the-know fellows that the likely outcome is throwing the whole project out; a bad conclusion for the city economically, architecturally, and morally to boot.

Oh, yes, it gets worse. Lincoln Lane North, getting caught up in the fallout, is in limbo too. Oy Vey.

DOWNTOWN - Miami Tower, that mid-90s downtown office building that looks like a big quarter slice of a blue wedding cake - you know, the one with the snowflakes in the winter - has an elaborate new lighting system that'll the whole thing a multi-prismatic, nighttime technicolor fantasia, and leave its neighbors looking bland by comparison.

SOUTH OF FIFTH - Out at the extreme end of South Beach, the Related Group has announced their latest residential money maker, an infill condo and retail building that's a bold and beautiful architectural statement called One Ocean, by famous architect Enrique Norten. Although he's designed a few things around here already, the only thing completed so far is, yes, a parking garage on 16th and Euclid, just around the corner from the Miami Beach Community Church, or Gloria Estefan's restaurant, Yucca. Imagining that on steroids might give you give you an idea of what it'll look like. Or not.