Eddie Huang and Richard Hales Duke it Out on Twitter

The latest Twitter pissing match is between Sakaya Kitchen's chef/owner Richard Hales and restaurateur/Vice magazine show host of "Fresh Off The Boat" Eddie Huang. Yesterday, the two got into it after Huang commented in an interview with Short Order that Sakaya Kitchen is "goofy." Hales responded and got the tweet-spat going, with the two slinging insults left and right about who's got more Asian cred. Other Twitter users have commented in the thread on Short Order's tweet, defending one chef or the other. Things look to have subsided in the heated match, with Hales getting the last word yesterday. 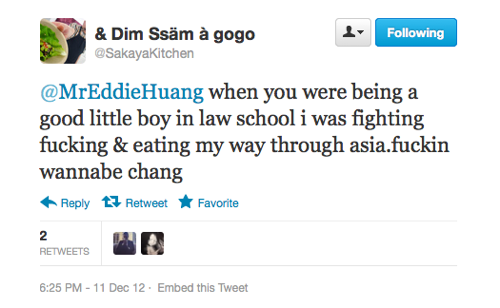