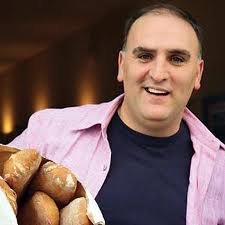 As most who follow these sort of things know, José Andrés was in town yesterday, making the rounds, "preparing for culinary magic @BazaarMiami," as SBE Hotels tweeted. Bazaar Miami, we're told by reps, is looking at a May opening. In the meantime, Andrés checked out the local goods, tweeting "@pubbellysushi amazing food in Miami!!!" and "@barceloneta another great spanish restaurant!! In Miami... " What he didn't tweet was that he was also at Michael's Genuine Food & Drink last night, where, says our spy, "It didn't appear that he and his posse had dinner. They were spotted checking out the kitchen and [were] out in front of the restaurant talking to Michelle Bernstein." About the weather, no doubt. [EaterWire]