Share All sharing options for: Todd Erickson of Haven

Welcome to One Year In, a feature in which Eater sits down for a chat with the chefs and owners of restaurants celebrating their one year anniversary. 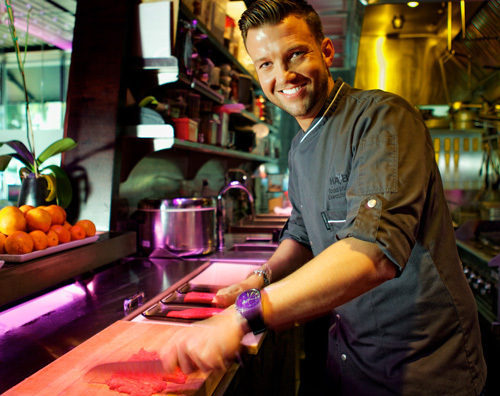 Just slightly over a year old, Haven, located on the west end of Lincoln Road, is one of Miami's most dynamic restaurants, overloading the senses with its futuristic electric decor, whimsical drinks from mixologist Isaac Grillo, and the inventive cuisine of chef Todd Erickson. Erickson, who previously served a stint as sous chef at Zuma, was courted by design entrepreneur Mike Boles to bring an adventurous menu to complement the restaurant's high tech concept. One year later, the restaurant continues to evolve and surprise. Eater recently chatted with chef Todd Erickson about the first year of Haven as well as the road ahead, including the upcoming project HuaHua.

E: What were your initial thoughts on pairing with design entrepreneur Mike Boles for Haven?
All of the previous restaurants and menus that I took on in the past have been a little more formal, more fine dining, but it was hard to say no to Mike’s enthusiasm and vision for this place. There was a lot of big talk involved when we were courting each other, going in on this together, everything he said he lived up and then some. I am very happy that he and I did partner and make this happen because the food goes very well with the environment, the technology, and the staff. That makes everyone so comfortable and everyone have a good time. We’ve had numerous people come in and say ‘This just works, it just works’ and that is something that we were hoping to create and something we are very confident we have created.

E: Did you have any challenges leading up to the opening of Haven?
The challenges were pretty much any kind of challenges that you would face opening a restaurant in any place, dealing with permitting, dealing with contractors, dealing with all that stuff on a tight schedule because you’re trying to make money and you don’t want to pay rent for something that’s not returning anything. That was the biggest struggle. Our next neighbors at Altamare were kind enough to let me use their kitchen during lunch hours when they weren't open so that I could do tastings for investors just so they knew that I wasn’t just some kid off the street. I did four or five tastings for different sections of the menu with a long table of linens and silver and everything. All the investors were very pleased - they all had comment cards - they all agreed and told me later that the food was more elevated than they had expected. So once that was out of the way, it was smooth sailing.

E: How was the opening?
Opening week was really good. Our PR company, TARA, Ink, brought in a bunch of people that were able to keep their mouth shut if it wasn't the greatest, and open their mouths to everyone if it was the greatest. It went very smoothly. It’s a very small kitchen that we’re working in. Me trying to lead the show and get people to work and everything and at some point it’s like “Oh, god will this end?” but at the same time “Oh, this is working really well so let’s keeping this going” The first couple of tastings were rough, put us through the ringer. But after that, everyone was hitting their stride and figuring what station is their's and moving around the mise en place to make it comfortable and ergonomic in a tight kitchen.

When we had our One Year Anniversary, a couple of people came up to me and said “You’re already having a One Year Party? You just had your grand opening party!” And that’s kinda true because we opened up and just kinda got into the groove of it and realized we needed to have our opening party so we actually had it four months late.

E: About year into the opening, what, if anything has changed at the restaurant?
We’ve had a few staff members go, move out of Miami, that’s why it’s hard because we’re such a small team. Having a change of staff is always tough. We’re actually really proud of retaining the staff that we have in such a transient business. The technology, we’re constantly adding new scenery to the walls to keep it fresh and ever-changing. We’ve changed around some of the nights for parties, for the last few months we’ve been doing “For Artists...By Artists” party on Sunday nights that allows local artists and international artists to show their artwork on the walls on those nights. So we have the artists in, show their work, and we make it an artsy dinner party, that’s really developed.

The changes in the food and cocktail menus, Isaac Grillo, our mixologist, and I, we like to play, keep it fresh and seasonal. So, having that tie into the bar and kitchen creates a nice synergy of having fresh flavors on both sides as well as have pairings that work really well together.

E: What has been the highlight moment of the past year that has defined Haven’s success
The one year is a big marker, because in culinary school they teach you over and over and over again, “This is not a cakewalk, this is not a cakewalk”. “80% of restaurants fail within the first year, get prepared for it, it is what it is”, etc. And they want you to be optimistic but at the same time you need to be grounded in reality. So hitting that one year mark and realizing that people really appreciate what we’re doing as a company - that’s a huge honor.

Also, I was nominated for Culinary Innovator of the Year from Johnson & Wales University, that was awesome. To be recognized by peers and educators that I am doing something different and that people are recognizing it, that is awesome. There are just so many of those things along the way, that just make that much better doing what I do but at the end of the day, I still love being in the kitchen and playing.

E: When you’re not at Haven, where are you eating?
Just in the last year, there have been so many great places Giorgio’s restaurant Eating House is awesome. That one is fantastic, it’s no frills because it’s a pop-up but he saved all the excitement and energy for the plate - it’s very refreshing. I love reading his menus and I love eating his food. And The Federal is another favorite, Cesar and Aniece are great people to start and their food is amazing, and their hospitality. For brunch, I go to BLT often. There’s a bunch of different places on the beach, but I really appreciate the small guys that are trying to do something innovative and fun, that’s usually where you will find me.

E: What’s next for Todd Erickson? Any updates on HuaHua?
HuaHua is definitely coming up, back to the frustrations of permitting and dealing with contractors and all that. So on top of Haven day to day, we’ve got HuaHua coming up. What we’re telling everyone is: “It’ll open when it tastes good and when it looks good”. When those two things come together, the open sign will be hanging because it’s too hard to predict when it’s going to open. But we’re hoping it’ll be within the next few months.

So that’s coming up, we’re looking to expand the Haven brand nationally and internationally. Mike is constantly talking to outside investors for new spots and new opportunities outside of the Miami area which is very exciting. There have been so many people who have been in here who have said “We need one of these in my hometown, we need one of these here”. So that’s great that people want to take a piece of Haven with them, open it up in their hometown.