If you buy something from an Eater link, Vox Media may earn a commission. See our ethics policy.

Share All sharing options for: "That Glow On The Beach": The 1950s Restaurants of 22nd Street

Occasionally, we like to look back on other periods of Miami dining. Here now is a nostalgic look at two legends from Miami's history. 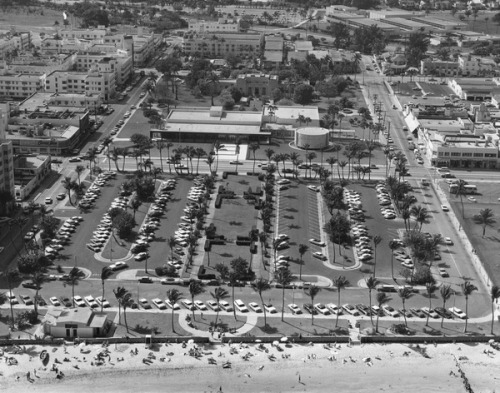 [1950 Photo of Bass Museum of Art Courtesy of Florida Memory]

Back in the 1950s, the blocks surrounding 22nd and 23rd street on South Beach where the epicenter of Miami nightlife with over ten restaurants and nightclubs entertaining socialites. Two restaurants in particular, both located on 22nd street, defined South Beach dining in this era: Embers and Park Avenue Restaurant. 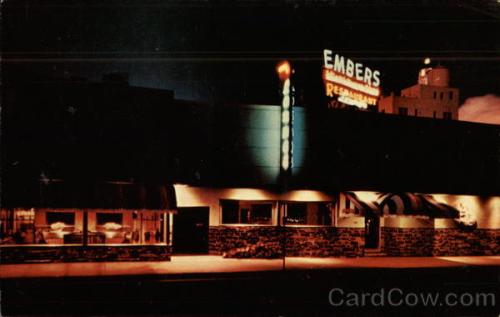 [Embers Courtesy of CardCow]
Opened in 1948 and located at 245 22nd St, Embers Restaurant and Cocktail Lounge was a glamorous dining destination with the motto "We cook with wood", serving up "hickory cooked baby ribs, chicken, duck, prime beef, pheasant, quail, venison, and brook trout" over an open pit. In late night fashion, the restaurant was serving their hickory barbecue in the cocktail lounge until dawn. In Seth Bramson's Images of America: Miami Beach, Embers was described:

"Embers was one of the beach's favorite and favored restaurants, and whether under the ownership of Sam Sterling, Radio Weiner (who later owned the Bonfire, in North Bay Village), or Walter Kaplan, the restaurant at 243 Twenty-second Street, just half a block west of Collins Avenue, was always great. The food (cooked with wood over an open pit), service and greetings were always superb." 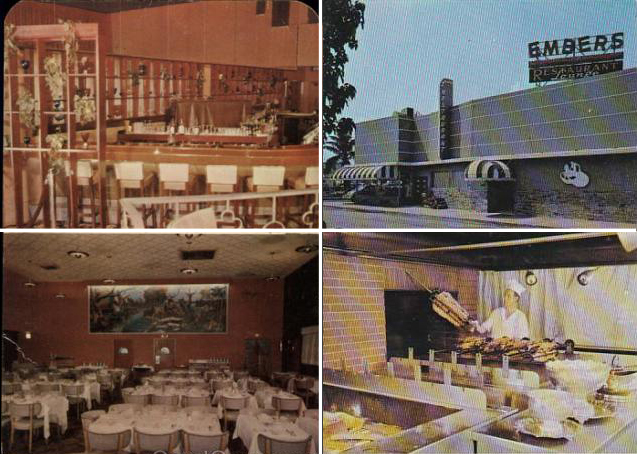 Embers withstood many decades of change, shuttering in the late 1980s (rumored, ironically, due to a fire) after numerous changes in ownership. In the twilight years of it's existence, legendary South Florida writer Bill von Maurer wrote in "That Glow on The Beach is the Embers", his 1985 restaurant review for the since deceased Miami News:

"However, loyal customers from the past will recognize the heaping basket of assorted breads that comes with entrees...They also may recognize Louis Fabrey, the maitre d', who has worked at the restaurant for 38 years. They also may recognize some of the waiters who have worked there for 20 or 30 years. The Embers is that kind of place, and Stahl and Hunter aim to maintain the kind of ambiance that lends the Embers a certain dignity and elegance."

Down the street from Embers, on the corner of 22nd Street and Park Avenue, was the famed Park Avenue Restaurant & Club, a fine dining, "see and be seen" spot popular with celebrities of the time, such as Charles Lindbergh, and famous for "steaks, chops, stone crabs, Maine lobsters....Quality and Bountiful Service". A postcard boasting of the excellent food and "delightful music" read:

"A rendezvous for people who enjoy good food; noted celebrities from all over the world come here; a visit to Miami Beach and its tropical splendor is never complete until you dine at this renowned restaurant."

One time Park Avenue Restaurant owner Bert "Wingy" Grober, "a colorful Vegas-Broadway-Miami character" was profiled upon his death in The Spartanburg Herald-Journal highlighting his quarter of a million dollar investment in a "Miami Beach's big Park Avenue Restaurant where the High Rollers, show-biz celebs and wise guys hung out, a veritable Miami Beach Lindy's."

Today, the area is still a hotbed of Miami nightlife and culture with the Miami City Ballet, Bass Museum of Art, Andrew Carmellini's The Dutch, STK Miami and The Restaurant at The Setai all within a few blocks of each other.