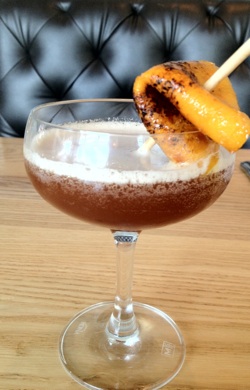 In the second sneak preview of what's to come from 50 Eggs Restaurant Group's restaurants this fall, Eater got the scoop on what to expect from Swine Southern Table & Bar. Again, the dynamic duo of Allegra Angelo and Rob Ortenzio, beverage directors for the other restaurants with 50 Eggs (Yardbird and Khong), were so kind to share some of the concepts behind the food and beverage development and give us a taste of a cocktail from Swine.

As far as the food goes, since Swine is set to be the "sister" restaurant to Yardbird Southern Table & Bar, it will have a lot of the same feel and style, but with a pork focus instead of game. It will be very much the same family-style, Southern table experience Miami has come to know and love at Yardbird, with more emphasis on smoking and barbecuing meats. Designing the menu right now, Chef Kenny Gilbert will use items that encourage sharing like a whole duck for four with interesting, comforting sides for the table. In addition to a pork-centered menu, offerings will include local foul and fish, game birds like quail, and vegetarian options too.

Moving on to the drinks, the cocktail menu will be brown spirit-driven with bourbon and scotch, even some pisco too. The process will be more culinary-based in that the drinks will require more care and attention with muddling and using fresh fruits and vegetables. While there will be a lot of classic drinks or new renditions of the classics, there will also be more experimentation with savory items into the drinks. Rob says, "Eventually, we would like to be able to blur the line between food and drink to where the evolution of the menu over time will get to a point where the drinks come out with edible garnishes: is this a drink, an appetizer, a bit of both? We want to open peoples minds, make them more receptive to creative drinks."

Regarding beer and wine, there will be a domestic beer focus on old school classics. Since Swine is in Coral Gables, it lends itself to a very wine-driven crowd. Again, the wine list will be sticking with the classics, using a great Bordeaux list, aged Malbecs, and traditional Napa Valley cabernet producers. Regions like Alsace and Hungary that get over looked will also be given some room on the page. Swine, like Khong, will also have a second bar upstairs that is still in the works, but Rob and Allegra say it will hopefully turn into a more private, exclusive spot for reserved events with a "bar chef."

So basically, take the superbly executed concept at Yardbird, make it revolve around a pig, and you've got Swine. It's going to have that same warm, welcoming, feels-like-home vibe that makes people feel so comforted when dining there. It'll be at that same approachable, affordable price point for the level of food and drink you're getting. The food and beverage programs will be constantly changing, offering something new each week. Allegra explains, "Our chefs are always keeping it fresh with specials each day. We just want to mirror that and reflect the changing market. There's so much out there to try. We like to change it up, educate our guests." As of now, they say to expect doors to open by December, but stay tuned for more updates as it gets closer.

Sample Drink: Blood & Sand. Made with scotch, sweet vermouth, Cherry Heering (a liquor from Denmark), orange juice, and a candied brûlée orange peel to garnish. Its flavors are tantalizing, with a smoky orange taste that whets the palette and leaves you wanting more. It's what a drink should be- not too fruity or overpowering, with a slight taste of the alcohol.