Our 2013 survey is coming to a close today. We asked our friends, industry types, bloggers, and food lovers to describe the dining in Miami over the past year, from Biggest Dining Surprises to Best Meals. Readers, please add your thoughts to the comments. 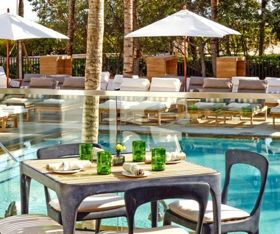 Q: Which restaurants, if any, did you break up with this year? Why?

Ryan of Miami Power Rankings: My relationship with Momi and Sumi was short-lived. Too many changes in menu, pricing, and hours. One day they accept credit cards, the next you have to pay in beaver pelts. The ATM at the corner only provides squirrel pelts. You can see my dilemma.

Steven of The Chowfather: NiDo cafe because the original chef left and Chef Philip Ho following rumors he was no longer involved coupled with multiple downhill reports. I will return to both for updates.

Evan Benn of Miami.com: No breakups, but I did get back together with one former lover: Sardinia. When it opened in 2006, Sardinia was my go-to for its fresh pastas and smartly priced quartinos of wine. But then, sometime in the past few years, its prices skyrocketed, and its service and quality lagged behind. Sometime in the past six months, however, there was a turnaround, and the switch flipped again. The wild boar and broccoli rabe with orecchiette is terrific.

Zachary Fagenson of Clean Plate Charlie:
Mercadito. I used to be a regular at their Taco Tuesdays and brunches, but for some reason they've slipped on execution. Greasy, overcooked fried fish, rubbery meat. It makes me sad because they're one of a only a few places that make they're own tortillas, and those happen to still be quite good.

Laine Doss of Miami New Times: Florida Cookery. I'm sorry, but when Kris Wessel opened the restaurant, the dishes were so personal, so steeped in his roots. I feel like eating there now it would feel like when you're forced to choose sides after your friends get a divorce. I'm sure the food is still good, it's just me.

Matthew Melzer of Thrillist: Pretty much anything run by 50 Eggs, but most notably Khong River House. Just because you get an initial great buzz doesn't mean you can start using chicken that The Colonel rejected. I loved Chef Bee, and I thought it was an extra classy move of Khong to name a specialty cocktail they served at a CHARITY event "Kill B." Your food has SUCKED since he left, don't be bitter.

Emily Codik of Short Order: Thankfully, this was a polyamorous year.

David Rosendorf (aka Frodnesor) of Food For Thought: I almost never break up voluntarily - they break up with me. This year BoxPark broke my heart by closing.

Ashley Brozic, Eater Contributor: Sorry OTC, it's not me. It's you.

*UPDATE - 50 Eggs released the following statement: "Khong's products have not changed since opening and are of the highest quality. In addition, our Kill B cocktail which, has been on our menu since opening, is in no way a reference to a former chef at Khong. It's a take on the classic 'Bees Knees' that dates back to the prohibition era. It's also a nod to Muhammad Ali's famous one liner. The thai bird chiles we add to the cocktail pack a serious punch."