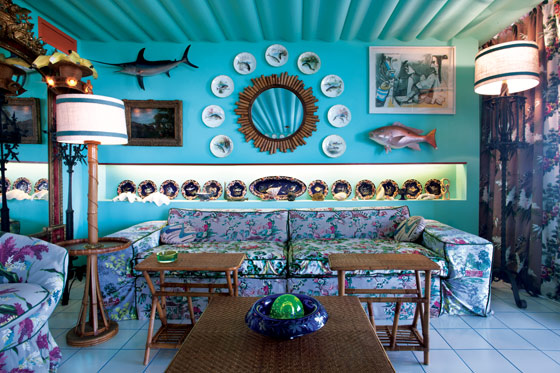 1) Palm Beach: This eclectic oceanfront condo can be found in the heart of Palm Beach?? The apartment, which includes a neon blue living room, is not owned by a couple of crusty old blue bloods, but by cult fave Nest Magazine's founder Joe Holtzman (who inherited it from mummy and daddy) and his partner Carl.

2) The Urban Core: Sure, Miami and New York have always been ideologically thisclose in a lot of people's minds (full of liberal, east coast city dwellers... that sort of thing) but a new plan to rezone a couple more Miami neighborhoods to Manhattan-like densities is quickly gaining steam. Say hello to 500 units an acre.

3) Mid-Beach: The former Lord Tarleton hotel, an art deco gem in Miami Beach, is being taken over by the Pritzker Family's Commune Hotel chain and reopened as an east coast outpost of the famed Roosevelt Hotel in Hollywood, home of the early Acadamy Awards. Sadly, not one single red carpet is visible in any of the renderings. Not one.
· Curbed Miami [miami.curbed]