Share All sharing options for: Convention Center Kibosh; Market Reports Are In! 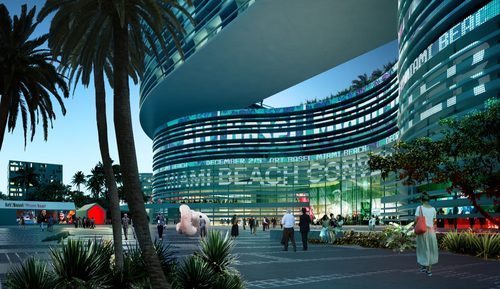 1) South Beach: After years of work planning the thing, Miami Beach's new Mayor and city commission have officially canceled their plans for a Rem Koolhaas-designed convention center, hotel, park, etc. Apparently he wants to do something much smaller with just a convention center, and pay for it out of city funds. Rem's team is not happy, and appears to be exploring their legal options.

2) Everywhere: The latest Douglas Elliman market reports by Curbed's right-hand real estate wiz Jonathan Miller for South Florida are in, and in the fourth quarter of 2013 we basically cashed in big time.

3) Everywhere: Do check out the best of the Curbed Miami Flickr Pool, and hey, if it strikes your fancy, why not join yourself? We'd love the contributions.

4) Downtown: Did you know that Miami (well, Downtown Miami) was originally designed as a pedestrian city? Yep, and it's gradually being brought back. Architect, and former MoMA curator Terry Riley talks about what's happening over here.
· Curbed Miami [miami.curbed]