Share All sharing options for: Michael Symon Wins Burger Bash Yet Again and More From SoBeWFF

[All Photos Courtesy of Amstel Light]

South Beach Wine and Food Festival swallowed Miami whole this past weekend. The streets became more traffic-laden than ever, our social media accounts drowned themselves in food photos and whoever attended the fest is now nursing an epic hangover, whispering they'll never eat/drink again. But aside from all that, some of the country's most reputable chefs and culinary personalities made their way down to the Magic City for what is the biggest food and wine event Miami has to offer. Sponsored by Food & Wine, the festival benefits Florida International University's hospitality school, which means, behind the party scenes, a whole lot of funds were raised for the school's students. For those who didn't partake in the annual madness in any way, here's some of what went down:

The Amstel Light Burger Bash, probably one of the biggest SoBeWFF events, struck again this past Friday night. Some points:


1. It was mobbed. There were hoards of people shuffling around, pounding burgers like there was no tomorrow, drinking copious amounts of Amstel Light and showcasing their most festive beer-burger-belly dancing moves. And, of course, there were tents after tents of (mostly) awesome burgers from different restaurants including some Miami classics like El Rey de Las Fritas, Pincho Factory, OTC, Tongue & Cheek and more.

Teamwork makes the Shack work. Huge props to our awesome team on the big win tonight at #sobewff #burgerbash! pic.twitter.com/QpMf6amgr7

2. But it was Michael Symon's burger that took home the big win. Rachael Ray, who hosted the event, meekly said she couldn't believe it when she announced that Symon's "Fat Doug Burger", a beef burger with pastrami, Havarti cheese and coleslaw had won the People's Choice Award. No one else could believe it either, considering that Symon's now won People's Choice award four times and it must be rigged.

3. Shake Shack got the Judge's Vote. With all the intensely gourmet burgers in the competition, this win came as a shocker as well. Is Burger Bash actually about the best burgers, or about the notable names participating? Over at Moet Hennessy's The Q:

1. Sports Illustrated models strapped on their aprons and hopped into The Q's makeshift kitchens to help grill up the goods. Meanwhile, carnivorous guests sampled some of America's best barbecue, while trying to balance their brightly-hued Chandon flutes in hand.

3. Amy and Mike Mills of 17th Street Bar & Grill were crowned King and Queen of The Q by Katie Lee and Jeff Mauro for their whole grilled hog (it was literally a whole grilled hog) with a side of their famous red beans. 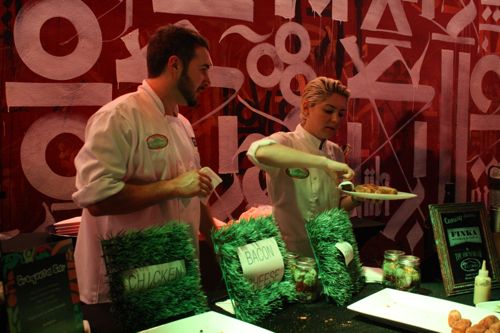 1. Medianoches were everywhere and it was a very good thing. Local chefs like Pubbelly's Jose Mendin and Bread & Butter's Alberto Cabrera dished out the classic Cuban concoction, while others like Islas Canarias provided some killer croquetas.

2. There were two kinds of people at the event: the kind decked out in glitter serving copious amounts of Botran rum and the kind donning disproportionately large Los Bobos bibs whilst trying to double fist said Botran rum and medianoches.

3. Anne Burrell, who hosted the event with Emilio Estefan, chose Latin America's sandwich as the winner of the night, with Los Bobos taking second and Cuban Guys snatching third. They announced the winners pretty early in the evening, which lead many to clear out way before the clock struck midnight. Bummer for them, more croquetas for us.

[All Photos Courtesy of Ashley Brozic]

1. You booze, you snooze. And sleepy faces were all around on Saturday morning. But no matter, they continued to eat and drink their way through enormous tents, guzzling coconut rums (in coconuts) and waiting in long lines for refreshing ceviche, stopping by to sit and rest only to watch various cooking demos. 2. Like Emeril Lagasse's demo. Sure he had raccoon-tanned eyes, but he also taught the crowds how to cook pompano and they loved it.

3. Nowhere near as much as they loved Marcus Samuelsson, though, who charmed the crowd at the Whole Foods event with his Swedish accent. When he was finished, he passed around hot dishes of crustaceans to his front row guests, who were left with extras as his jam-packed tent cleared out quickly.

4. A barefooted Anthony Bourdain also made an appearance to speak about his chef-studded show, Treme, alongside the show's producers. He mentioned, naturally, that he touches himself to the scene where Alan Richman gets a drink thrown in his face.

Head over to Eater National for more on South Beach Food & Wine and a couple of video highlights.
—Ashley Brozic contributed to this piece
· All Coverage of South Beach Wine & Food Festival [EMIA]
· All Hangover Observations Coverage [EMIA]