Share All sharing options for: Tobacco Road Goes Big With The Cocktail Collection

Go big or go home is what they say and Tobacco Road is certainly going big, even if it might soon be closing. The up-for-grabs, century-old bar has just redone it's upstairs cabaret and turned it into The Cocktail Collection, a new bar with, obviously, an intense focus on cocktails. Tobacco Road owner Patrick Gleber has partnered up with mixologist Leo Holtzman to create an experience unique from that of Tobacco Road, this one celebrating "an era when cocktail was king" with 10 cocktail options, some of which will stay on the menu and some of which will change seasonally.

"We've got several good years left here to create this brand of high-end cocktail mixology; to showcase exceptional music and combine a bit of old-world history with modern magic," says Gleber. Though many do hope Tobacco Road hangs around for a few more years, some think it might not be the case. 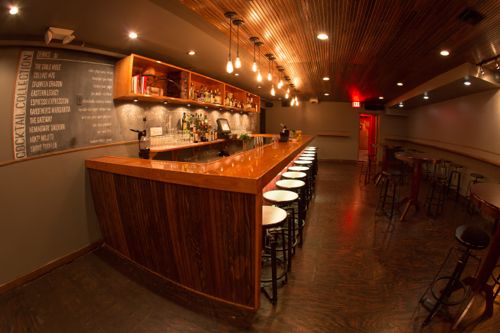 The land Tobacco Road sits on was sold in 2012, with the guarantee of an extra three-year lease for the bar. Tobacco Road does, on paper, still have until 2015, but plans for its relocation are already in the works. Gleber and his partners have apparently agreed to sell Tobacco Road to its loyal employees, if they come up with the necessary funds. If they don't, however, Gleber says the bar will be sold to whoever else wants it.

Until then though, the Tobacco Road team stays optimistic, especially since their latest opening. The Cocktail Collection is open Wednesday through Saturday nights with a half-price happy hour from 7 to 9 p.m.
· All Coverage of Tobacco Road [EMIA]
· Tobacco Road Planning to Sell and Relocate [MNT]