Chris Waage of Adoré: "Stand Out and You'll Get In"

Share All sharing options for: Chris Waage of Adoré: "Stand Out and You'll Get In"

This is The Gatekeepers, in which Eater roams the city meeting the fine ladies and gentlemen that stand between you and some of the hottest and hardest-to-get tables in Miami. 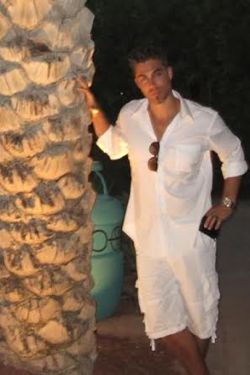 Meet Chris Waage. He's the guy who's going to help you get through the doors at the recently opened Adoré. Owned by nightlife impresario Cy Waits, the club boasts a 12,000-square-foot, cathedral-style space with Funktion-One sound systems, dark red candles and plenty of hidden corners. If you want to get in, the formula is pretty simple: be a pretty girl. Or, just be a cool person, wait patiently and stand out in some way, whether by being tall (thank those genes) or dressing nicely. As for what not to do when you're standing in line, don't be "obnoxious or arrogant." We feel you, Chris. Here's everything else he had to say:

How'd you end up being the doorman at Adore?
Well, I knew Cy [Waits] back in Vegas, I lived in Vegas about ten years back, and I've always liked Cy and what he was about. I found out what he was doing over here, I was actually working at SL Miami at the time, and they were actually supposed to open up back in December, but construction got pushed back and everything ... It kind of was good timing because SL ended up closing down and right after I got a phone call from him and kind of just slid right in, so it was a perfect timing type of thing. I left SL and stepped right into Adore.

On a busy night, how long does a regular (non VIP) person wait to get in?
It really depends … I'm not one to hold the door. A lot of doorman like to hold the door to kind of build a little bit of a crowd outside, I don't like to do that because Miami's hot and muggy and a lot of the girls are in heels in makeup and they want to get inside. I like to get people inside as fast as I can get them in honestly. Obviously I cater to table guests as priority because that's our revenue and once I get them in, I get anybody else in. I don't want them to wait longer than they have to. You'd be surprised, sometimes it could be just 10 minutes. But at 1:30, peak time, I have like a group of people trying to get in, so that might be the worst time to come and you'll have to wait longer. It depends on when you get there.

What methods do people use to make their wait shorter?
Obviously, good-looking girls go a long way [he laughs]. If you have a good-looking member in your group, put them in the front … no I'm joking. My job is to get people inside and obviously you want good-looking people inside, so I go up and down the row and if I see someone tall or that stands out, with a nice fancy dress or a nice suit on or whatever it is, you stand out as an individual, you're going to be picked and get right in. Stand out and you'll get in quickly.

What's the most unusual offer you've ever received?
[He laughs] I have to be careful with what I say … well, I've had women offer, um, things. Like room keys, for example. I'm being straight up honest, I get room keys. That's pretty out there, I think it's quite funny.

How often do you have to kick people out?
I personally don't have to kick anyone out, once you're in, you're in. Obviously, we have a security team inside that handles anyone who gets out of line. Since I've been there, I think we've had to maybe once or twice. You kind of see people outside and know who is going to cause trouble … obviously people get drunk and act a little stupid, but the ones who will get in trouble, I try to keep those people out. People who are in line and you don't let them in immediately and start getting a little loud and obnoxious outside, it kind of shows us how they'll act inside. I try to weed those guys or girls out before they even get inside. That's kind of my job as well.

What pisses you off most when people are trying to get in?
When they say, "do you know who I am?" That just drives me crazy. I could really care less who you are or how much money you have or what you do. I don't like obnoxious or arrogant people, I like very cool guys, cool girls that don't mind waiting a couple of extra minutes even if they have ten, twenty million in the bank account … we don't need to know that.

What's your favorite night at Adore?
Saturdays have been really, really good. We have some really cool people come on Saturday nights. I've been on the beach for a while, so I know a lot of the locals and a lot of people come support us. I would say Saturday. It's a cool crew, a cool crowd and we never really have any problems … everyone has a good time, so it's a great time to come.

What is your essential gatekeeper tool?
Well, everybody that you ask about me, they're going to tell you that I'm on my phone 25 hours out of the day. I'm getting constant emails, messages, Whatsapp messages, all night long. So, as far as a tool is concerned, without it, I don't know how I'd be able to work. I don't have a radio, so I would say cell phone for sure. Without it I'd definitely be lost.
· All Coverage of Adore [EMIA]