Share All sharing options for: Jorgie Ramos' Ode to The Pig, Barley & Swine

It's been one year since Jorgie Ramos opened up his pork-centric Barley & Swine, a restaurant that serves a menu chalk-full of unapologetically lard-praising, meaty meat dishes like sticky pig ears, braised venison, pork cheek vaca frita, fried bone marrow ... the list goes on and on. We caught up with the chef just in time for Eater's The Five Days of Meat and talked one year in at Barley & Swine, challenges, changes and more. 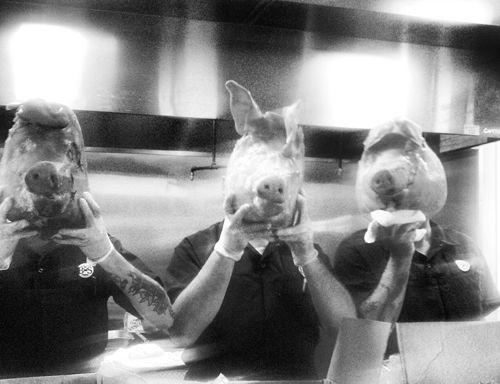 Overall, how was this past year at Barley & Swine?
It was amazing, as far as I'm concerned. There was a lot of learning and a lot of great experiences. I met a lot of people and I personally had one of the best years of my life in a long time, so for us it was a great year. It really was.

Do you remember what opening day was like?
Here's what I can remember: the two or three days before we opened up, we did our soft-opening, and I remember not being able to sleep for about two days because I couldn't figure out how the kitchen was actually going to run and if we would make a mistake or not, so that I remember very clearly. The first day of opening, though, it's a blur.

What are some of the biggest challenges that you faced this past year?
I'd say just really figuring our what we're doing. I've never worked in a restaurant similar to this and it's a completely different monster. It was just learning, day in day out, what customers want, what works, what doesn't work; it was the biggest challenge we had here.

What changed over the year, if anything?
One of the bigger things that's changed as far as what we thought we were going to do foodwise — we had a real big issue in the beginning as far as what are the women going to eat when they come, let's make sure we have some healthy dishes and more vegetable stuff — what we've learned again and again is that people come here not to eat the vegetables or healthy stuff, they come in here to have a good time and do their cheat days here, so we changed more toward comfort food. That was the biggest change: being afraid to not have a female clientele and I think right now our clientele is like 80% women. Girls come in in groups of four or six and just sit there, drink wine and eat and ignore everybody around them ... it's actually the complete opposite of what we thought we were doing to deal with.

What is your focus at the restaurant right now?
My focus is just continuing to put our solid food and make sure it's a good environment for everybody. We want to continue to improve our customer service too. A big thing we have, a big issue, is that the restaurant really isn't big enough to fit all the people that want to come in and enjoy, so we have the issue of wait times. So for now, our biggest focus will be to figure out how to get people in and out and have them not waiting so long. It's our biggest goal now.

Are you thinking of expanding the space?
I am not. It's good for what it is, the fact that it's smaller gives it personality — everybody talks to each other, everybody's close to each other. I think right now it's just up to us to figure out reservations and walk ins.

What's in store for the future?
People always talk about dreams of getting bigger and doing more ... I'm happy with where we're at. My whole goal right now is just to continue to improve and tweak Barley & Swine. We're ten steps ahead of where I thought we were going to be a year ago, so it's hard to imagine doing anything else.